hile Australia is often described as a construction hub around the world, it is sometimes hard to go past other nations when it comes to impressive infrastructure. With the likes of China, United Arab Emirates and Singapore moving through exceptional periods of growth, the world is playing witness is some of the bravest working at heights operations ever attempted.

At Anchor Safe Systems, we take particular interest in these projects and look forward to see how they will progress. These project managers and designers continue to push the boundaries and change how construction across the globe is approached. As such, we have shared one of our favourite working at heights construction efforts currently underway. 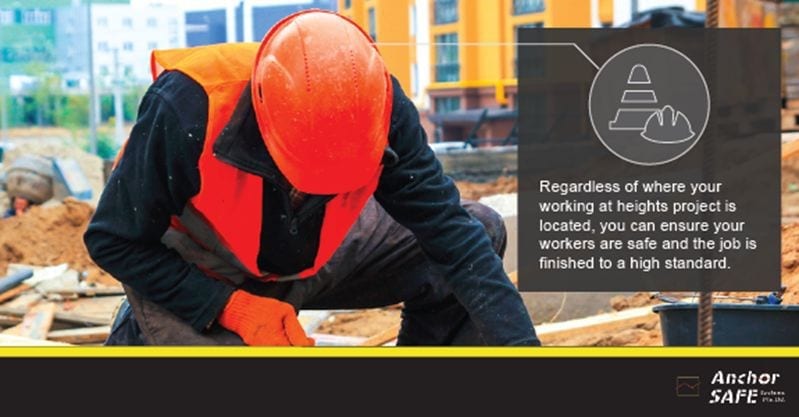 Whether China or Australia, workplace safety is important.

As one of the most dominant economies and fastest growing populations, China is at the heart of the world’s construction activity with southern city Shenzhen a classic example. At present, there are 13 buildings above the 300m mark currently under construction, according to The Skyscraper Center.

The tallest of these projects is the Ping An Finance Center a 600m giant skyscraper. This building is expected to be finished in 2016 and will become the fourth tallest building in the world, surpassing Goldin Finance 117 in Tianjin (596.5m).

The project is regarded as a new generation building, incorporating a tall, dense design that can stand the test of time.

Construction on the giant skyscraper began in 2010.

Construction on the giant skyscraper began in 2010, with project managers and designers actually planning to build China’s tallest skyscraper (higher than Shanghai Tower) by fixing an antenna to the top. However, these plans were blocked by a nearby flight departure path, a 2015 Council on Tall Buildings and Urban Habitat article noted.

“Since the 90s, it has become increasingly important to strike a balance between urban development and aviation safety in Beijing, Shanghai, Guangzhou and Shenzhen,” a civil aviation official told the council.

For working at heights professionals, one of the key features of the Ping An Finance Center is the world’s largest stainless steel facade. The Skyscraper Center noted that it used 1,700 tons of 316L stainless steel perfect for city’s close proximity to the salty ocean environment.

The visually impressive structure is due to be completed this year, with construction already underway on a south tower set to be connected to the main building.

Regardless of where your working at heights project is located, you can ensure your workers are safe and the job is finished to a high standard. This is where Anchor Safe Systems can be of assistance.

For information about our equipment and services, contact us today.